(Note: FYI, the baseball vacation postings start with the Friday, Aug. 9 post.)
Our last day started out with a tour of Oracle Park, home of the Giants. We had an outstanding tour guide who was thrilled to have a whole group of devoted baseball fans, as opposed to disinterested tourists. We went on the warning track, offering a great view from field level. DON'T get on the grass! 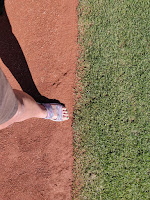 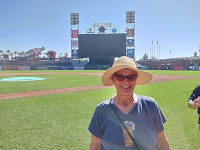 The traditional batter's eye in center field is actually a working vegetable and herb garden, the produce of which is used in the stadium's food service. Willie Mays is the all-time hero of the place, and his retired number was 24, and they use 24 everywhere. There are even 24 palm trees surrounding his statue in the Willie Mays Plaza. 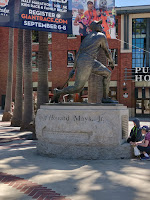 The highlight of the tour for me was the visitors' clubhouse. We were treated to stories by the clubhouse manager, including the celebration after the Cubs beat the Giants in the 2016 NLDS. As a Cubs fan, and certainly not a Giants fan, I was in hog heaven.
Upon returning to our hotel, I went out on a quest for ice cream. I went to a Ghiradelli shop and enjoyed two scoops while sitting in the nearby park and basking in the beauty of the bay and brilliant sunshine. There were folks swimming in the bay, and I expect that water was quite cold.
Evening time found us, after a long, slow bus ride, at Oakland Coliseum for the Athletics-Astros game. 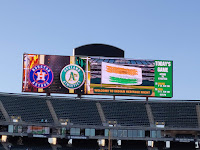 The main adjective I'd use for the stadium is "old." It's not the worst I've seen (Yankee Stadium is), but it is not memorable in any way. The video boards are way up high above the highest seats. The neighborhood is trashy at best. The concourses were fairly roomy, but I think that's because the crowd was so small. Many vendors weren't open because of that. Unlike the ridiculously high beer prices at Oracle Park, food and drink prices in Oakland are way more reasonable, so I sprung for a $12 beer. (That beats $19.25 at Oracle.)
It was a beautiful evening and we had great seats on the first base side. There were ten (yes, 10) home runs hit during the game, which the As won 7-6. Given that many of us had to catch very early flights, we were really glad it did not go into extra innings.
Back at the hotel, we said our goodbyes to the group, bus driver and hosts, completing another excellent tour by Triple Crown Baseball Tours.
Ready to go home,
Leta

Posted by Leta Renee Miller at 8:56 AM