(Note: FYI, the baseball vacation postings start with the Friday, Aug. 9 post.)
We completed the bus trip up the coast, going directly to Oracle Stadium for the Giants-Athletics cross-town rivalry game. (Think Yankees-Mets or Cubs-White Sox.) I did my traditional trek all the way around the stadium to check it out, and also to locate a delicacy that had been recommended to me by a Giants fan/friend. In my roaming, I discovered a new high price for beer at a stadium: 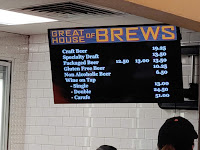 Don't strain your eyes, I'll tell you... $19.25 for "craft beer." Given that I can get a dozen really fine beers at home for that price, it was easy to pass on the "craft beer" there. It was hot for these folks, in the mid-80s, and the video board kept posting warnings about staying hydrated, especially "older people." Luckily us older people had seats in the shade just past third base. It is a lovely stadium, but the concourses are narrow and therefore uncomfortably crowded. I went out during the game for both food and toilet breaks, and it felt like half the crowd was on the concourses. I learned the technique of getting behind some big, fast-moving guys who served as blockers for me.
It is the setting of Oracle Park that makes it special, sitting on McCovey Cove. There were several boats awaiting home run balls, but none of those went out of the park. There is a counter on the wall in right field for "Splash Hits," currently resting on 80. 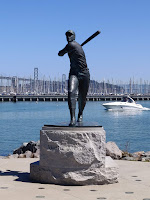 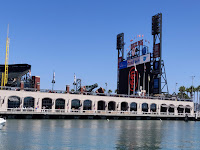 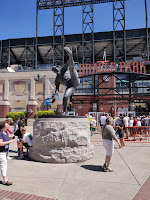 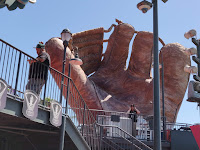 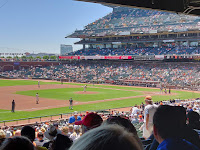 It was another game with a lot of action, and the Athletics won 9-5. The aforementioned food delicacy was the Cha Cha Chicken Bowl consisting of Jerk chicken, rice, black beans and pineapple salsa. Not your average ballpark food, it was quite tasty, and even reasonable at $11.25. But then the accompanying bottle of water was $5.75. Can you tell I miss my hometown cost-of-living?!?!
Even though our hotel was only four miles from Oracle Park, in rush hour, it took us almost an hour to get to the Marriott. The introvert in me was ecstatic to have an evening locked away in a room all to myself with a happy-hour beer, snacks and the Cubs game. Alas, the Phillies slaughtered the Cubs, but it's now a new day for more baseball.
Onward to Oakland,
Leta