(Note: FYI, the baseball vacation postings start with the Friday, Aug. 9 post.)
After lazing with coffee, reading and writing, Saturday got off to a great start with an Uber ride to the Little Italy Farmers' Market. It is many blocks long with vendors on both sides of the street. Besides magnificent fresh produce and flowers, there were vendors featuring jewelry, clothing, cosmetics, juices, and all manner of healthy and not-so-healthy food options. I can attest that the red raspberries are outstanding! 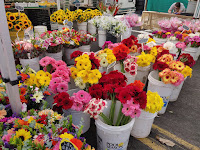 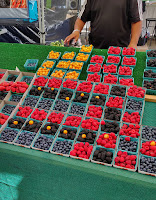 I walked through Little Italy and seemingly dozens of cafes and restaurants to Ballast Point Brewing Company (whose beer we get in Wichita) and enjoyed an outdoor lunch of fish tacos and beer.
I feel it is important to have some sort of routine while traveling, so I returned to the hotel for my afternoon nap, napping being a hobby to which I am extremely dedicated. 😀 At the appointed time, I met up with tour hosts Darren and Bobby to get my game tickets, a fun reunion. I eventually walked the couple of blocks to the stadium and roamed around. It's a lovely stadium. There is a huge grassy hill beyond center field where you can watch the game or a concert on the stage behind the left center field wall. There are cool statues of Tony Gwinn and Trevor Hoffman, as well as a Padres Hall of Fame. This stadium may have the broadest range of good beers of any ballpark I've been in so far, as there are dozens of micro-breweries in the area. I made my way to my seat, ten rows up from the field on the third base side. Nice! 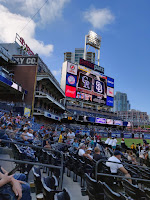 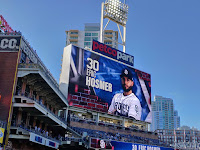 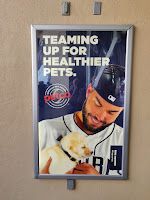 I'm including the Eric Hosmer shots for Kansas City fans who are especially fond of him, including me.  The poster of Hos with the puppy is pure melt-down. It was a great game, lots of action and several home runs. The Padres won 8-5 over the Colorado Rockies.
To use an official baseball term... HOLY COW!!! Watching the video board between innings, I thought "that looks like my Cubs shirt," and I looked up at the face and it was me! A nanosecond of my 15 minutes gone, how fun! I guess that means it pays to be in the "good" seats. That was a "first" for me and a great bonus on the first game day.
On to Dodgers Stadium...
Leta

Posted by Leta Renee Miller at 9:08 AM