(Note: FYI, the baseball vacation postings start with the Friday, Aug. 9 post.)
Monday started out in fine fashion with calling my (much) older brother to wish him a "Happy 80th Birthday!" He's working hard at reversing a declining health situation, and I'm so grateful for him and his efforts.
We left the hotel late morning (yes, I got myself out of the magnificent bed) and headed for Huntington Beach. WOW, there are miles of really wide, beautiful, clean beach. I walked to the end of the pier on an ice cream quest. Ruby's Diner did not disappoint--probably the best malt I've ever had. I spent time watching the surfers and then a seal playing with a school of fish and enjoying the occasional one for brunch. I walked down the coast a bit, found a place to sit under the clearing skies, and enjoyed people-watching. Seeing all manner of diversity in our human family in one area makes my heart happy. Alas, I arrived at the volleyball nets just a bit too late to watch several quite handsome young men in action.
After a short break back at the hotel, the bus took us the short distance to Angel Stadium. 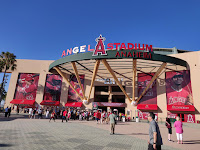 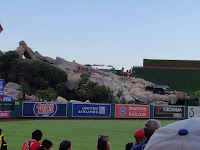 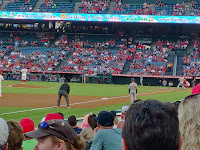 I was reluctant to think that any stadium could bump Kauffman (Royals) Stadium off my #2 best spot (Wrigley Field forever being #1), but this one did. It is beautiful! It has wide, open, airy concourses with excellent food and beer choices. The rock waterfall beyond center field is stunning. The digital scoreboard and video boards are quite gigantic and cool. We had good seats beyond third base, eight rows up. The only downside is that the Angels have not extended the protective netting past the dugouts, so we were in prime foul ball territory and had to really pay attention to the game. Of course, that's the point of being there. Once again, we saw several home runs, and the Pirates won 10-2. It was glorious to enjoy the evening's cool temperatures knowing that it had reached 100 degrees earlier in the day back home.
After a very short night's sleep, we are heading up the coast.
Leta

Posted by Leta Renee Miller at 9:01 AM