May we respect the need for silence in our lives.

That is an anonymous line from my current daily read, A Grateful Heart. I am a person who loves silence. Noise is the equivalent of physical clutter to me. It drives me nuts and drags down my spirit. Being an introvert (yes, I am!), too much noise eventually equates to too many people, and I have to retreat. My favorite spot of retreat is my woman cave. There a fan is continually on to be my "white noise" of silence.
I confess that I am not so much a "music lover." While I enjoy music, given the choice of silence or music, I'll take silence. I don't have any music or TV on when I am home alone, and if I have headphones in, it's because I'm listening to a podcast, not music.
I'm going to hop on my soap box for a moment. Are you one of those folks who goes to work all day, leaving your dog outside to bark incessantly? I used to love to putter in my garden, but not anymore, for as soon as I step on the deck, neighbors' dogs start barking, and they don't stop till I retreat back inside. The peaceful joy of gardening is long gone for me. Soap box fussing complete.
It feels to me these days that noise never stops. Choosing silence requires deliberate effort. I invite you to pay attention to what you hear around you, and investigate what it takes to get some quiet time. Try silence on and see how it feels.
Peace and quiet to you and me,
Leta

Posted by Leta Renee Miller at 5:30 AM No comments:

Putting life into perspective, a useful reminder for most of us...

This prayer-poem is by Ina J. Hughes, from the book, A Grateful Heart:

We pray for children
who sneak popsicles before supper,
who erase holes in math workbooks,
who can never find their shoes.
And we pray for those
who stare at photographers from behind barbed wire,
who can't bound down the streets in a new pair of sneakers,
who never "counted potatoes,"
who are born in places we wouldn't be caught dead,
who never go to the circus,
who live in an X-rated world.
We pray for the children
who bring us sticky kisses and fistfuls of dandelions,
who hug us in and hurry and forget their lunch money.
And we pray for those
who never get dessert,
who have no safe blanket to drag behind them,
who watch their parents watch them die,
who can't find any bread to steal,
who don't have any rooms to clean up,
whose pictures aren't on anybody's dresser,
whose monsters are real.
We pray for children
who spend all their allowance before Tuesday,
who throw tantrums in the grocery store and pick at their food,
who like ghost stories,
who shove dirty clothes under the bed, and never rinse out the tub,
who get visits from the tooth fairy,
who don't like to be kissed in front of the carpool,
who squirm in church or temple and scream into the phone,
whose tears we sometimes laugh at and
whose smiles can make us cry.
And we pray for those
whose nightmares come in the daytime,
who will eat anything,
who have never seen a dentist,
who aren't spoiled by anybody,
who go to be hungry and cry themselves to sleep,
who live and move, but have no being.
We pray for the children who want to be carried
and for those who must,
for those we never give up on and for those
who don't get a second chance.
For those we smother... and for those who will grab the hand of anybody
kind enough to offer it.

Knowing my life is truly easy and care-free, and so thankful for it,
Leta
Posted by Leta Renee Miller at 5:15 AM No comments:

This past Tuesday on the way home from work, I learned that in our parched-and-dry-fire-hazard part of the country, the home of a friend of a friend was burned to the ground. Talking with my understandably-rattled friend about it, we agreed that an event such as this truly brings the importance of our "stuff" into dramatic perspective.
Here is a quote I ran across several days ago:


"But when we really delve into the reasons for why we can't let something go, there are only two: an attachment to the past or a fear for the future."  Marie Kondo, The Life Changing Magic of Tidying Up

I like to think that my life is fairly simple and uncluttered. Yet as I look around me in the woman cave, and mentally roam our house, the thought of ever having to move is totally overwhelming because of all the "stuff" we have. Right now, there's an entire room-full around me, and there's very little of it that I couldn't let go. Yet I'm comfortable here. The room is "me." I do put effort into keeping the clutter at bay. It's important to remember that this "stuff" that is often quite meaningful to me is just "stuff" to someone else. (If you are an estate sale shopper like me, you totally get that.)
Post tax-season will bring on another cleaning/tidying/releasing exercise. I have the above quote to guide me. I shall use it to reinforce the love in me (grown from the past, the only thing I can truly keep) and my faith in expanding good (not fearing the future).
Here's to a lighter life,
Leta

Posted by Leta Renee Miller at 7:13 AM No comments:

I am a complete and total freak over Legos. I believe them to be the best toy on the planet, possibly even the Universe. My two sons' Lego collection grew to enormous during their childhood. I still have that huge box of Legos, and I have added significantly to our original collection with some outstanding estate sale purchases. I think I'm operating under the mantra, "She who dies with the most Legos wins."
I often talked with my older brother about Legos when our sons were younger. All he talked about was how it hurt like hell when he stepped on one, especially unsuspecting in the darkness of nighttime. So when I saw this picture, I laughed out loud. So true!!!

When I was in my mid-fifties, I was on retreat in California, and I learned that Legoland was nearby. Thus began one of the highlight adventures of my life, a solo trip to Legoland. I had a blast!! Unencumbered by impatient children or bored adults, I took my time exploring and riding rides and taking in the amazing wonder and creativity of it all. Do you know that there are real-live engineers whose JOB it is to build huge Lego creations?!?!? (Maybe my next lifetime...) They have a store there (of course) where bricks are separated by color and size and you can buy them by the pound. The park has everything from tiny villages to a giant dragon to a full-size Volvo SUV made out to Legos. It includes models of the Taj Mahal and the Sydney Opera House. Displayed near each creation is the number of Legos involved; sometimes that number is well into the six figures. 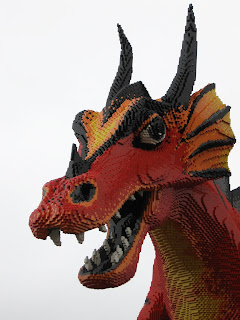 What will you do today to have fun with something you love?
Busy creating,
Leta

Posted by Leta Renee Miller at 5:22 AM No comments: